The discovery and development of antibiotics–one of the major scientific and medical advances of the 20th century– has led to dramatic improvements in treating infectious diseases and has significantly increased food-animal production.

However, widespread and sometimes indiscriminate use of antibiotics has resulted in microorganisms that are resistant to these agents. Moreover, infectious diseases such as E. coli and Salmonella continue to cause significant economic losses in the swine industry.

Antibiotic-resistant bacteria are posing increasingly serious concerns. Alternatives to conventional antibiotics that will provide effective means of preventing and treating diseases are urgently needed to maintain consumer confidence in a safe food supply. 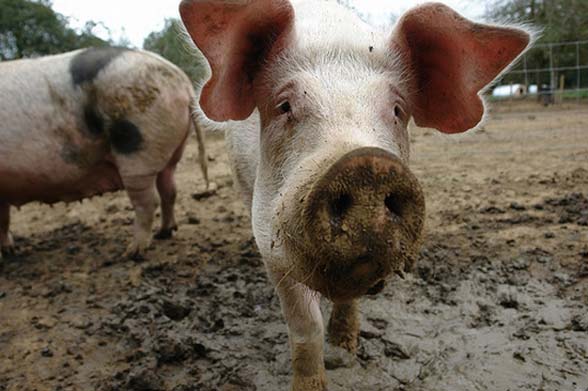 POSSIBLE SOLUTION
One promising answer may be antimicrobial peptides – small proteins that most animals and humans produce in their bodies. These proteins act as a first-line defense against disease at its entry points (e.g., skin, eyes, tongue, trachea, lungs, and gastrointestinal tract). Until recently, little was known about them.

Antimicrobial peptides kill various bacteria, fungi, and some viruses. Many of them kill bacteria by literally punching a hole through the invader's outer protective coat, or by disrupting its internal communication network. Often called "natural antibiotics," because animals produce them naturally, these proteins tend to kill a broad range of microbes. Researchers believe that it will be difficult for microbes to develop resistance against them–unlike conventional antibiotics.

This peptide is known as porcine betadefensin- 1. It kills bacteria (such as Salmonella DT104) that have developed resistance to many conventional antibiotics. It is even more effective when used with other pig antimicrobial peptides.

The research team found that two other swine antimicrobial peptides (PR- 39 and protegrin) can increase the antimicrobial activity of the porcine betadefensin- 1. When used in combination, these peptides increase the killing effect on microbials by one thousand- to one million-fold, compared to using them alone.

These synergistic findings suggest that antimicrobial peptides in pigs will be able to fight off and kill important swine and human pathogens without the use of conventional antibiotics.

IMPACT
The researchers' goal is to find alternative means of addressing the issue of antibiotic usage in food animals by developing natural antimicrobial peptides. In 6 years of research so far, three promising pig antimicrobial peptides have been identified that kill a variety of microbes, and two patents have been awarded for derivative inventions.

Because antimicrobial peptides kill microbes by physically disrupting the invaders (in contrast to a different attack mode used by conventional antibiotics), the likelihood of bacteria acquiring resistance to these natural products is low.

These advances have allowed the research team to accelerate its study of the control of expression of antimicrobial peptides in pigs.

The ultimate purpose is to learn how to increase pigs' production of their own natural antibiotics so that they can better fight disease using their natural immune systems. What is learned with swine may also prove to apply to other livestock (such as cattle and poultry) that produce natural antibiotics.