Growing Pig Management -- Pigs undergo many physiological changes between weaning and market weight. The digestive system converts from one best suited to using milk to one suitable for the breakdown and absorption of complex carbohydrates and proteins found in grain and soybean meal. Daily feed intake normally increases steadily between weaning and market weight. Lean growth rate reaches a plateau when the pigs weigh about 130 lb and declines thereafter. These changes are the basis for the feeding recommendations listed for growing finishing pigs in this nutrition guide. Pigs should have ad libitum access to feeds reformulated to contain different ingredients and nutrient densities as they grow. This is commonly called "phase feeding." Phase feeding is essential to optimizing pig performance and controlling feed costs in a swine enterprise by limiting the time that nutrients are over- or underfed. In addition, phase feeding reduces the amount of nitrogen and phosphorus pigs excrete. Starting pigs weighing less than about 25 lb should be fed diets containing several specialty ingredients. Thereafter, switch them to grain-soybean meal-based diets containing few, if any, specialty ingredients. Reduce the nutrient density of the diet as pigs approach market weight. 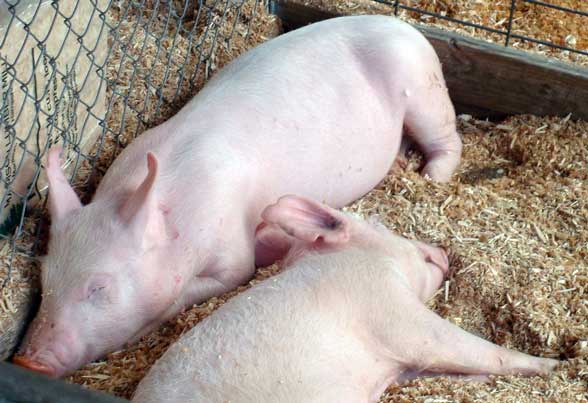 How does fat affect growing pig performance?
In growing-finishing pigs, fat consistently improves feed efficiency. On average, feed efficiency is improved by 2% for each 1% increment of added fat. Feed efficiency and daily gain are improved more by feeding fat to pigs during the summer than the winter. For example, daily gain may be increased by 1% for each 1% addition of fat in the summer, whereas little, if any, improvement in gain is expected in the winter. Carcass fat content is not greatly altered unless added fat levels exceed 5% of the diet and the amino acid:calorie ratio in the diet is not maintained constant. Energy intake is a major factor limiting lean growth rate in pigs weighing less than about 130 lb. Fat additions to grain-soybean meal diets may increase energy intake, especially in hot weather, and improve lean growth rate in young pigs. On the other hand, added fat is less valuable in finishing pigs, because energy intake from grain-soybean meal diets is often sufficient to maximize lean growth rate. Fat often is added to starting pig diets to aid in the manufacture of pelleted, milk product-based diets. Also, research indicates that as little as 2.5% added fat (50 lb/ton) reduces dust in confinement buildings by about 25%. Similar effects are observed in feed mills. Reduced dust levels have improved health implications for both pigs and people.

What happens when diets contain too much protein?
Feeding excessive amounts of protein and amino acids usually wastes money, results in increased nitrogen excretion, and reduces growth rate and feed efficiency. A greater amount of nitrogen in the manure has the potential for contaminating the environment, including increasing the level of ammonia in the atmosphere. Pigs also will consume more water and they may exhibit a mild diarrhea.

Should high levels of zinc be added to starting pig diets?
Nutritionists typically add 100 to 150 ppm of zinc to starting pig diets to meet requirements for growth. Recently there has been interest in feeding nursery pigs diets containing 2,000 to 3,000 ppm of zinc to combat postweaning stress and diarrhea. Also, zinc ions cause the organism responsible for swine dysentery (S. hyodysenteriae) to produce less toxin. Research results indicate the response to high levels of zinc in the diet is highly variable; in some studies no change in growth rate or feed efficiency has been observed, but in others the response has been large (Table 7). Also, feces are made firmer by high levels of zinc in the feed. However, questions remain about how zinc-containing manure may affect anaerobic lagoons and the soil. Over 99% of the zinc fed to pigs is excreted in the manure. These factors suggest that the decision to use high levels of zinc should be made on a case-by-case basis. Careful monitoring of pig performance when high levels of zinc are added is recommended. It is important that the extra zinc be supplied by zinc oxide; otherwise toxicity problems may develop. Add 2,500 to 3,000 ppm (7.0 to 8.3 lb of zinc oxide/ ton of complete feed assuming the zinc oxide contains 72% zinc) to feed for a maximum of 28 days postweaning, because zinc at these levels may be toxic. Maintain about 10 ppm of copper in any diet containing 2,000 to 3,000 ppm of zinc, because there is no additional growth response from higher dietary copper fortification.

What about separate sex feeding?
Penning barrows separately from gilts and feeding them different diets allows producers to gain better precision in feeding pigs. The feed intake of gilts and barrows begins to differ significantly when they weigh about 80 lb. From 80 lb until market weight, gilts consume about 8% less feed than barrows do, but they deposit lean tissue at least as fast as barrows. Thus, gilts need diets with a greater concentration of amino acids than barrows do; otherwise they will experience slower growth and poorer efficiency of gain, and produce carcasses with lower lean content than their potential. The decision to separate barrows from gilts and feed them different diets should be based on the producer's production and marketing goals. A marketing system that rewards carcass leanness (value-based) usually is necessary to maximize returns from separate sex feeding. We have provided separate amino acid recommendations for barrows and gilts in this publication.

• Limit-feeding
The principle behind limit-feeding is to reduce the amount of excess energy pigs have available for fat synthesis. Research shows that restricting feed intake of finishing pigs (> 125 lb) to 80 or 85% of ad libitum causes an 11 to 17% (about .15 inches) reduction in 10thrib backfat. However, the number of days to market increases by about two weeks. Limit-feeding can be done by restricting the time pigs have access to self feeders or floor feeding several times each day. We do not recommend limit-feeding to 80 or 85% of ad libitum intake, because currently the increased production costs (which include increased management to monitor and adjust feed delivery devices) generally are not offset by a higher carcass premium.

• Dietary amino acid level
In general, as dietary amino acid density increases, carcass backfat decreases. However, a large increase in the lysine level of finisher diets causes a relatively small reduction in backfat. In a recent large study, a 47% increase in dietary lysine level (from .59 to .87%) for medium lean gain finishing barrows reduced their backfat by 6% or .08 inches. No additional reduction in backfat was observed when the diet contained more than .73% lysine. In gilts, carcass backfat was reduced by 11% or .11 inches when dietary lysine level was increased from .59 to .87% during the finishing phase.

• Betaine
A byproduct of sugar beet processing, betaine currently is being evaluated in finishing pig diets. In some cases backfat has been reduced by 8 to 14% when diets containing 1,250 ppm of betaine were fed for 35 to 40 days before slaughter. On the other hand, some studies have shown no response to betaine supplementation. We believe the response to betaine in corn or milo-soybean meal diets is not consistent enough to warrant routine use. Thus, evaluate the use of betaine on a case-by-case basis.