Pregnancy diagnosis in swine: A comparison of two ultrasound instruments 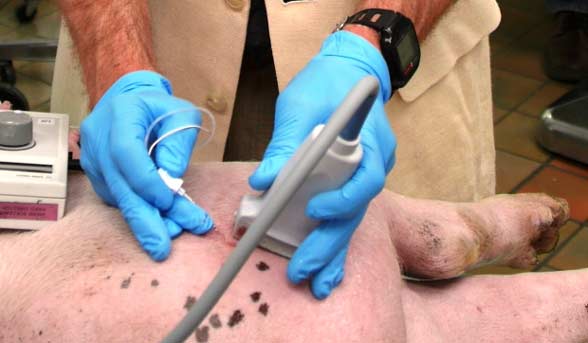 Presently, ultrasound is the most practical and widely used technique for pregnancy diagnosis in sows. The Doppler and amplitude-depth ultrasound instruments have been used routinely for this purpose by swine producers and veterinarians. Doppler instruments detect the changes in frequency of reflected ultrasound waves which arise when they are reflected from a moving surface, e.g. fetal heart or middle uterine artery. Detectable frequency changes are converted to audible sounds which are emitted from a loudspeaker or earphone (8). This instrument is claimed to be 90% accurate for detecting pregnancy at approximately one month of gestation (9,10,11). Pulse-echo or amplitudedepth ultrasound instruments generate pulses of ultrasound from a handheld probe, which detects the presence of fluids in a viscus, e.g. uterus, because of the difference in acoustical impedance between the contents in the fluid-filled viscus (gravid uterus) and adjacent tissues (12). This technique is rapid, simple and claimed to have an accuracy of 90% or more in detecting pregnancy as early as 25 days postbreeding (9,12,13).

In a recent study of the "not-in-pig" sow syndrome in Ontario swine herds (14), it became apparent that the method of pregnancy diagnosis may contribute to the problem through misdiagnosis or incorrect usage of these ultrasound instruments. The present study was designed to evaluate the sensitivity, specificity and positive predictive value of two commercially available ultrasound instruments, the Ilis (International Livestock Improvement Specialists, J.K. Machinery, St. Jacobs, Ontario) amplitude-depth pregnancy detector and Medata (Medata Sales, Elmira, Ontario) Doppler pregnancy detector. Serum estrone sulphate concentrations were determined for early confirmation of pregnancy.

Experimental Design and Animals
Forty-eight sows housed at the Arkel Research Station, University of Guelph, were used for the study. The arrangement of these sows was not modified during the investigation. Thirty-eight sows were mated at estrus and examined daily by a qualified operator with the Ilis and Medata from 15 to 45 days after mating. The sows were observed daily until farrowing and the farrowing dates recorded. In addition, blood samples were collected using the orbital sinus bleeding technique (15) from each sow between days 27 and 30 after mating. The blood was centrifuged within two hours of collection and the serum was collected and frozen at -20° C, until assayed for estrone sulphate.

A second group of ten nonmated sows were similarily examined with the two ultrasound instruments between 15 and 45 days after an observed estrus. Blood samples were collected between days 27 and 30 postestrus, the serum was harvested after centrifugation and frozen at -200 C, until assayed.

A direct radiommunoassay technique which eliminates an extraction step was used to determine estrone sulphate concentrations in the serum (3,16). The characteristics of the antibody used have been previously determined (16). Each sample was assayed in triplicate and the results expressed as an average of three estimations. In this study, serum estrone sulphate concentrations equal to or greater than 0.5 ng/mL were considered indicative of early pregnancy (6,7).

Statistical Analysis
The experimental period was divided into three intervals: 15-22 days, 23-30 days and 31-45 days after mating or estrus. Since pork producers would be using pregnancy diagnostic instruments after a mated animal had passed one estrous cycle, only the results from the last two periods were included in the statistical analysis. A minimum logit X2 was used to test differences between the sensitivity and specificity of the two instruments over the 23-30 and the 31-45 day periods because this also allowed testing of the instrument x period interaction (17). If the interaction was significant, the results for individual instruments were tested over the two periods with an adjusted X2 (17). The sensitivity of each instrument is defined as its ability to detect pregnant animals and represents the proportion of pregnant animals that test positively. Specificity of the instrument is defined as its ability to detect nonpregnant animals and represents the proportion of nonpregnant animals that test negatively (18). The positive predictive value represents the proportion of pregnant animals among those that test positively and answers the question, given that an animal tested positive, what is the likelihood that the animal is actually pregnant?

The results obtained (Table I) indicated that neither instrument was sufficiently sensitive to be of any practical use for pregnancy diagnosis during the period from 15 to 22 days or before an unsuccessfully mated animal would normally return to estrus. A minimum logit X2 analysis (Table II) showed that the Ilis amplitude-depth instrument had a significantly (P < 0.01) higher sensitivity so was more reliable for detecting pregnant animals than the Medata Doppler type. The comparison of results obtained between 23 to 30 and 31 to 45 days and nonsignificant interaction indicated that both of the ultrasound pregnancy detecting units had significantly higher sensitivity when used during the later period. The positive predictive values during the second and third examination intervals were 95.5% and 94.5% respectively for the Ilis and 99.5% and 99.6% for the Medata instrument.

The results obtained for the ability of the two instruments to detect nonpregnant animals (specificity) showed that the Medata pregnosticator was clearly superior (Tables I and II). Since the interaction was significant in this analysis, the results for individual instruments were compared separately and the adjusted X2 calculated for each of the instruments over the two periods was: for the Medata, X2 = 0.01 and the Ilis, X2 = 80.38 (P < 0.01). This difference in response would explain the significant period effect and interaction in the minimum logit X2 analysis.

DISCUSSION
In the present study all gravid sows were correctly diagnosed pregnant on the basis of having a serum estrone sulphate concentration in excess of 0.5 ng/ mL, 27 to 30 days after mating. This finding is comparable to previous reports (3,4,5,6). It should be emphasized, however, that this or any other diagnostic parameter used early in gestation cannot correctly predict whether or not all sows will farrow since fetal resorption or mummification of an entire litter subsequent to the positive pregnancy diagnosis will affect the farrowing rates.

The results of this study highlight some advantages and disadvantages associated with the use of ultrasonic pregnancy detectors. Neither instrument is sufficiently precise to provide a reliable diagnostic test before 23 days, but this finding was of little concern, since use of ultrasound pregnancy detectors is not advocated this early in gestation. The accuracy of both instruments was acceptable within the 23 to 30 day range of gestation.

The sensitivity of amplitude-depth pregnancy analysis was greatest 31 to 45 days after mating, in contrast to its lower specificity. A maximum positive predictive value of 95.5% was achieved during the interval 23 to 30 days postbreeding. This finding is contrary to a previous report in which the predictive value of the amplitude-depth instrument reached a maximum value at day 42 postmating (13). This difference may be explained by the variations in the number of pregnant and nonpregnant sows examined in each study. However, these differences in results may suggest that the amplitude-depth type of ultrasonic pregnosticator can produce quite variable responses. Furthermore, if the results of the present study are representative of the results obtained in commercial swine units, it can be assumed that five percent of all sows diagnosed pregnant between 23 to 45 days after mating with a single test using this ultrasonic instrument will not farrow.

Possible sources of false positive tests with the amplitude-depth pregnancy detector may include accumulations of fluid within a nongravid uterus. Extensive uterine edema associated with zearalenone toxicity (19,20) or purulent metritis are likely sources of such accumulations. Although these pathological conditions may be encountered in commercial units, the most common source of false positive tests is a distended urinary bladder.

The sensitivity of the Doppler pregnosticator in this study was comparable to values described in some previous investigations (9, 10). Buddle (10) and McCaughey and Rea (I 1) claimed the Doppler pregnosticator was not sufficiently specific nor predictive. However, Benjaminsen and Karlberg (9) indicated that the Doppler pregnosticator attained high specificity and predictive values, similar to the findings of the present study. Nevertheless, the lack of sensitivity of this instrument can lead to a number of pregnant animals being erroneously classified as nonpregnant. Consequently, pregnant sows may be culled unless pregnancy diagnosis is repeated. Furthermore, the interpretation of the ultrasonic signal is subject to individual judgement and background noise (ventilation fans, vocal sows, friction rubs) may also affect the accuracy of diagnosis with the Doppler pregnancy detector.

In summary, the amplitude-depth pregnancy detector although easy to use, has a lower positive predictiveness but is sufficiently sensitive for practical application. The Doppler ultrasound instrument is cumbersome and demands expertise and favorable conditions for its optimum use. Ultrasound pregnancy detectors may be beneficial, but the user must be aware that these technical aides are not replacements for sound managerial practices. Under practical conditions each animal should be tested two or more times until results are consistent and the operator is confident they are reliable.

Great article, thanks for sharing it!