Some say the animal is so cute. Others say it is the funniest- looking thing they’ve ever seen. Either way, scientists in the United States were delighted to obtain some for research in the late 1980s. They are the Meishan (pronounced MAY-shawn) pigs of southern China. They were always known for their large litters (15-16 piglets compared to 10-12 for U.S. sows).

Researchers from various countries wanted to find out why this occurred. The first Meishan pigs (and a few other Chinese-bred pigs) were brought to the United States in 1989. After being quarantined in Florida, they were delivered to ARS’ Roman L. Hruska U.S. Meat Animal Research Center (MARC) in Clay Center, Nebraska; the University of Illinois; and Iowa State University. 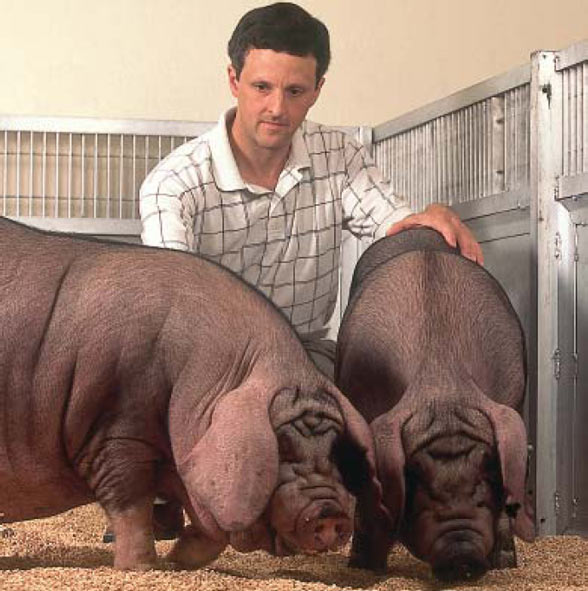 After further study, they found that Meishan females begin puberty in only 60 days, much earlier than other pigs. They also ovulate more eggs per cycle and have a greater uterine capacity to deliver more live piglets. Eventually the researchers started studying the males and learned some interesting facts about their reproductive organs, too.

The first important finding was that Meishan boars have five to seven times more FSH in their blood than U.S. boars have, but their testes were 40 percent smaller than those of U.S. boars.

The small size reflects the finding that Meishan boars have fewer Sertoli cells—the cells that develop sperm—in their testes. So, fewer Sertoli cells means less sperm and, curiously, more FSH. But how this mechanism relates to litter size or to other reproductive traits is still under study. ARS researchers also found that a gene (or genes) on the X-chromosome affects the size of Meishans’ testes, whereas in rodents, testis size is more affected by the genes on the Y-chromosome.

Scientists like the fact that Meishans provide a new and different model to investigate swine sperm production. Ford says that since 75 percent of newborn pigs in the United States are produced through artificial insemination, finding ways to improve sperm production is important to improving the efficiency of U.S. pork production.

Pork products from Meishans taste as good as those from conventional breeds, but Meishan meat has more fat. Ford says his laboratory is using the Meishans only as an experimental model to compare to other breeds of pigs. They are not very useful for crossbreeding, but their unusual characteristics help scientists study biological processes in traditional pigs.