Biosecurity includes the use of certain management practices to prevent the introduction of new disease and the spread of existing disease on swine operations. Examples of these practices include: proper handling of new breeding stock; the use of multiple-site production; proper pig flow management; strict rodent control; and controlling human and vehicle entry between and within operations. 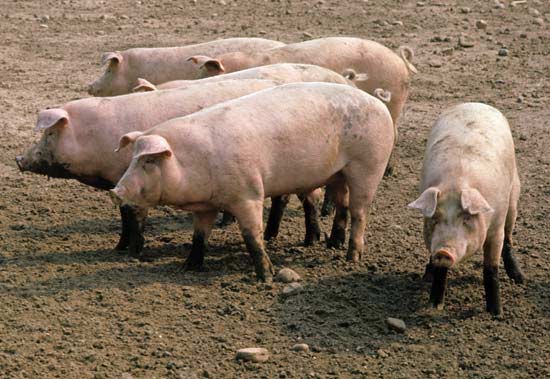 Isolation and Health Testing
A common threat to biosecurity of the breeding herd is the addition of new animals. Isolating incoming animals prior to introduction into the herd minimizes the risk of disease entry. During isolation, animals can be observed for clinical signs of disease, tested for pathogens they may be carrying, and acclimated to organisms already present in the breeding herd.

Use of Artificial Insemination and Sources of Semen
Artificial insemination (AI) reduces the risk of disease transfer between the boar and breeding female. However, certain pathogens can be transmitted in semen. Nearly one-fourth (23.2 percent) of all sites with sows or gilts used AI; however, this varied tremendously by site size. Most large sites (91.3 percent) used AI, while 61.4 percent of medium sites and only 12.1 percent of small sites used it.

Use of Separate Sites and Segregated Early Weaning (SEW)
The Swine 2000 study found that 36.4 percent of sites with farrowing facilities moved weaned pigs to “separate-site” nurseries. Of sites with nurseries, 50.0 percent moved pigs to separate-site grower/finisher facilities. Three-quarters of large sites (10,000 or more pigs) used a separate site for either nursery or grower/finisher facilities, while less than half of small sites did so.

Segregated early weaning (SEW) is an important disease-control management strategy. For this study, sites that had a maximum weaning age of 20 days or less and moved weaned pigs to a separate-site nursery were defined as SEW sites. Overall, only 4.7 percent of sites used SEW; however, many more large sites used SEW than medium or small sites. Because of this, 21.4 percent of all weaned pigs and 28.7 percent of pigs on large sites were raised using SEW (Figure 3).

Sources of Weaned Pigs
Weaned pigs may enter the grower/finisher phase of production from several sources. The biosecurity practices of these sources and the risk associated with using mulitple sources should be considered. More pigs entering the grower/finisher units from December 1999 through May 2000 (52.8 percent of pigs) came from farrowing or nursery units that belonged to the site (either on or off the site) than any other source. Feeder pig producers (both contract and non-contract) supplied 40.8 percent of pigs that entered grower/finisher units. Only 0.7 percent of all pigs originated from an auction, salebarn, or livestock market.

Pig Flow Management
All-in/all-out management means that every animal is removed from a room, building, or site prior to restocking. These facilities are then cleaned and disinfected before placing new animals in them, which greatly reduces the transmission of diseases between different groups of animals. This type of pig flow management was used on 51.1, 60.2, and 53.7 percent of sites that had farrowing, nursery, and grower/finisher phases, respectively, accounting for 79.4, 87.4, and 83.0 percent of all farrowed females, nursery pigs, and grower/finisher pigs.

To further decrease the chance of disease transmission among different groups of pigs, 16.6 percent of sites with weaned market pigs used wean-to-finish buildings to reduce the need to resort and move pigs.

Visitor and Employee Restriction
Nearly two-thirds (65.5 percent) of sites restricted entry to swine facilities by allowing access to employees only. For sites that allowed visitors, large sites (57.7 percent) were much more likely than small sites (4.1 percent) to require that visitors shower before entry. Almost all large sites (98.3 percent) required visitors to wear clean coveralls and boots before entry, while only 43.2 percent of the small sites did so.

To prevent visitors from accidentally introducing organisms, such as through nasal secretions, a 24- hour “no-swine-contact” period prior to entering the swine facilities was required on 23.6 percent of sites that allowed visitors (Figure 4).

To prevent employees from accidentally introducing diseases into the herd, 89.7 percent of all sites did not allow employees to have contact with swine not owned or managed by the operation. For large sites, the percentage was 96.4 percent.

Rodent Control and Exclusion of Cats from Facilities
Rodents, cats, and some wildlife may serve as a reservoir for various swine diseases. A welldesigned rodent control program is essential for all swine operations. The most common method of rodent control was bait or poison (88.5 percent of sites) followed by cats (60.6 percent of sites), despite the fact that cats may spread disease to swine. Using cats to control rodents was much more common on small sites (68.0 percent) than on medium (25.9 percent) or large (5.2 percent) sites.

The percentage of sites where all buildings used to house swine were constructed and maintained to keep out cats or rats and mice increased as the size of the site increased (Figure 5).